Following the kick-off meeting in Stockholm, Baltic Sea Region Research Network on Societal Security (BSR-RNSS) met for the second time in Helsinki on 22-23 January 2019. The meeting was hosted by the Laurea University and gathered 25 participants from the partners’ organisations. This time, Lund University (Sweden), Saint-Petersburg University of State Fire Service of Emercom of Russia and Swedish Defense University joined the initial group of researchers, who are determined to create better connections between science and practice.

After two days of intensive exchange of opinions, presentations of ongoing research and group work, the participants came closer to formulating a format of the future functioning network of researchers and continued mapping of the key stakeholders for future engagement. Funding calls for a potential larger project to institutionalise the network were explored as well. As a result, the CBSS Civil Security team gathered the information and sent out a special PA Secure Newsletter dedicated to funding.

Long-term challenges for the establishment of a successful interface mechanism, which will allow an effective knowledge exchange between practitioners and researchers were formulated:

To tackle these challenges, the partners decided to take the following steps before the next meeting in Warsaw in March 2019: 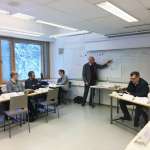 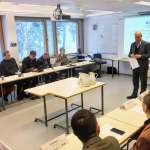