Posted 1 year ago by bsr-secure

The report: “The Sendai Framework in the Baltic Sea Region: Challenges – good practices – way forward” has been produced by the Policy Area Secure team at the CBSS Secretariat for the CASCADE project: “Community Safety Action for Climate Adaptation and Development” (January 2019 – December 2020). The project is funded by the European Commission’s Directorate-Générale for European Civil Protection and Humanitarian Aid Operations (DG ECHO). 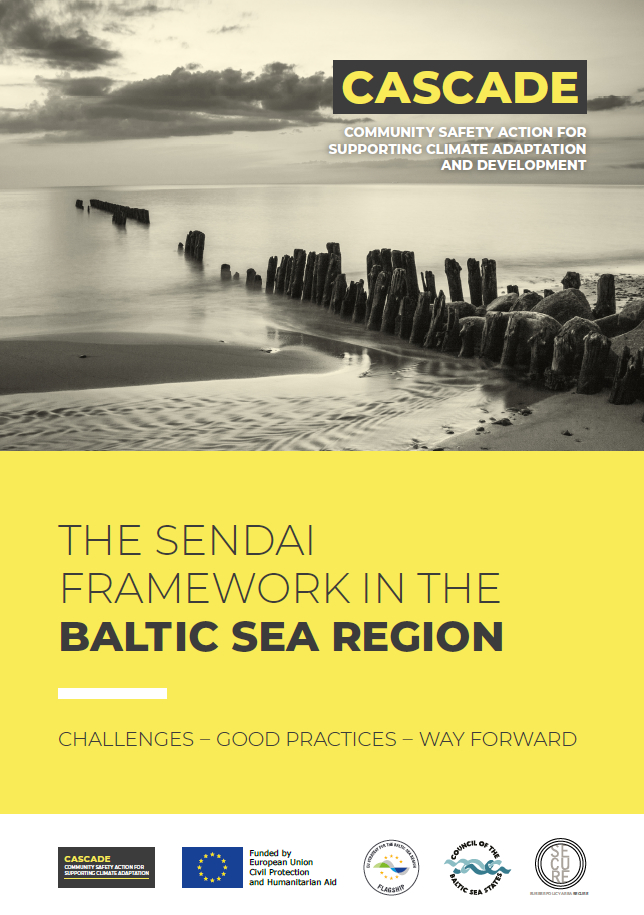 The material for the report has been collected through discussions with the National Focal Points for the Sendai Framework (or other national representatives responsible for DRR) in Denmark, Estonia, Finland, Germany, Latvia, Lithuania, Norway, Poland and Sweden. The discussions focused on national and local DRR strategies, international cooperation, and risk assessments and warning systems. The aim of the report is to provide an overview of the implementation of the Sendai Framework in the BSR – focusing on challenges, good practices and potential paths for strengthening the work.

In the words of one of the Focal Points: “There is a tendency to stick to the known risks that are related to cases we have already seen – we are starting to look more at climate change risks, but the time horizons are a bit challenging… –  risks developing slowly over time”

The other report: “The Role of Local Governments in Adapting to the Climate: Overview of regulatory requirements and support mechanisms in the Baltic Sea Region” is compiled by the Stockholm Environment Institute Tallinn Centre, with support from the CBSS Secretariat (HA Climate, EUSBSR). The report focuses on legislation and support mechanisms on the local level for the work with Climate Change Adaptation. The report also puts forward recommendations for future work.

Both reports will be presented and discussed in the first transnational Policy Dialogue meeting in the CASCADE project at the XV UBC General Conference on 16 October in Kaunas, Lithuania.

1 year ago No Comments