On 28-29 May 2019, the Latvian chairmanship of the CBSS Civil Protection Network hosted the 17th Meeting of the Directors General for Civil Protection in the Baltic Sea Region. The meeting concluded the eventful chairmanship, during which the Latvian Fire and Rescue Service initiated several joint activities, including the BLP Alumni Conference in Riga and the contribution to the European Forum on Disaster Risk Reduction 2018, both of which considerably improved the state of the international cooperation in the societal security in the region.

After the welcoming words from the Chief of the Latvian Fire and Rescue Services, Oskars Āboliņš, 30 delegates from 10 CBSS Member States were informed by the coordinating countries about the most important aspects of the implementation of the Joint Position on Enhancing Cooperation in Civil Protection Area.  As expected, one of the prevalent themes of the discussion was the forest fire season of 2018, as well as the preparations for summer 2019 and the importance of international cooperation in prevention and response activities related to forest fires.

The updates on the Joint Position’s ongoing and future activities and projects, such as recently finalized HAZARD and EVAPREM, were complemented by a thought-provoking presentation by Magnus Ekengren, Professor at the Swedish Defence University. Professor Ekengren provided a broad overview of the most pressing transboundary threats in the Baltic Sea Region and urged the delegates to use research results in their work to be “better prepared and stay at least five years ahead of potential disasters, not merely react to what already happened.”

During the second day of the Directors General meeting, the delegates exchanged news about recent developments in civil security in their countries and presented several proposals for joint initiatives. Notably, Russian delegation put forward the concept of a cross-border project focused on forest fires. Nordic states presented their joint work on comparing and sharing statistics for evidence-based decision making and invited other countries to participate in a Nordstat workshop in Karlstad in October.

Implementation of the UN Sendai Framework was in the focus of the address, given by the Deputy Director of the European UNDRR office, Abhilash Panda. Mr Panda informed the delegates that presently 55% of the CBSS Member States are reporting progress against Sendai targets with only one country – Estonia – whose reporting is complete and validated. The areas for improvement, according to him, include alignment of National DRR Strategies to Sendai and engagement of the private sector, especially SMEs, which are particularly vulnerable to disasters.

CBSS delegation presented a concept of a demand-driven BSR research roadmap for societal security, which was developed by the Baltic Sea Region Research Network on Societal Security (BSR-RNSS) with the aim to create a working interface between academia and practitioners in the region. The delegates reacted positively to the concept and voiced expectations to receive first concrete results during one of the next Directors General meetings.

At the end of the meeting, the Danish delegation provided the participants with a brief overview of the Danish presidency priorities, which will include two main areas: climate change and volunteerism. In continuation of the successful capacity building Baltic Leadership Programme (click here for the Brochure BLP in Civil Security 2012-2019, published by the Latvian State Fire and Rescue Service) Denmark’s DEMA will also host the next Baltic Excellence Programme in Civil Security in Tinglev, 18-20 November 2019.

The meeting concluded with a traditional bell handover ceremony. 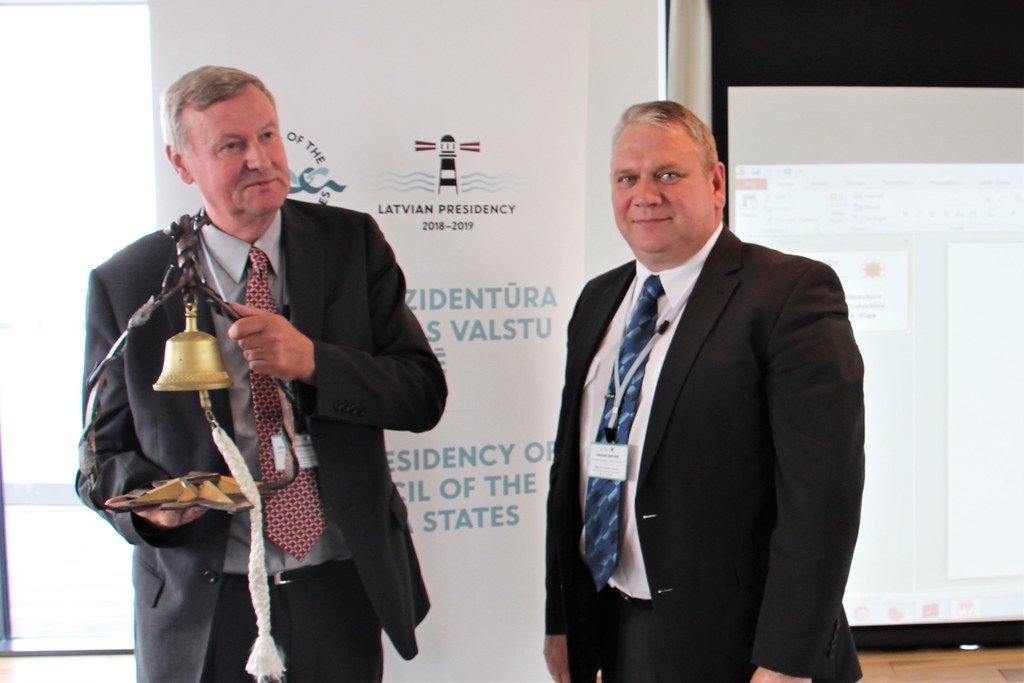